(A 1947 memoir of friendship between a Hindu and Muslim girl on 14th August’s fateful night, that dismembered one land, one country into two. This work is published in Punjabi magazine Waryam – June 2019, with the cover page poetry by Shiv Kumar Batalvi’s famous work “Rukh”, which means a tree. English transcript available within this blog)

To your beloved’s being

Is the same for a soul of fire

That belongs to the lover.

Apparently, love is in the air.

Do something for it,

So that fire would burn in bliss,

Dancing with its companion—the water.

The universe has converged to a single point

To witness this union of water and fire.

May this world watch

What a night it was! Probably the most glorious night of my life. A feeling of sheer peace had spread out across my being, allowing me to completely surrender to the sublime moment I was living.

Sometimes you get short of words to express yourself; at that instant of realization, tears start to roll down as words are never enough to describe the emotions your heart has had captivated for long. To avoid the scuffle of this sync, I prefer to manifest my energies into silence.

It was a chilling late December night when I landed in the province of Khorasan along with my friends. Mercury had dipped to a zero degree centigrade. This was two days before the night I talked about. During this time of the year, its normal for the northeastern provinces in Iran to record sub-zero temperatures and heavy snowfall. However, we could not get to experience either of those during our four-days stay in Mashhad.

I had never been exposed to such low temperatures before, but despite such cold, certain vibrations in the air had cosied up everything around us. Everyone appeared just so warm, needless to mention figuratively at 0° C!

On the way from Mashhad airport to our hotel, I could just catch a glimpse of the holy shrine of the eighth Shiite Imam, Imam Al-Reza, who was not only a descendant of Prophet Mohammad (pbuh) but also a celebrated intellectual, a spiritual master to many sufis and a renowned scholar of his era.

The shrine has his mausoleum where he rests, apart from the seven big courtyards, a museum, seminaries, libraries and a mosque. Although I had experienced the grandeur of the magnificent shrine in many documentaries, videos and photographs before, but that glimpse was unmatched for what I had gathered in my imagination for years. It left me yearning to reach there in no time. A strong shot of epinephrine ran down my spine, exciting me to meet and greet him in the blink of an eye. I bet it is certain that he personally invites all his pilgrims, his guests. 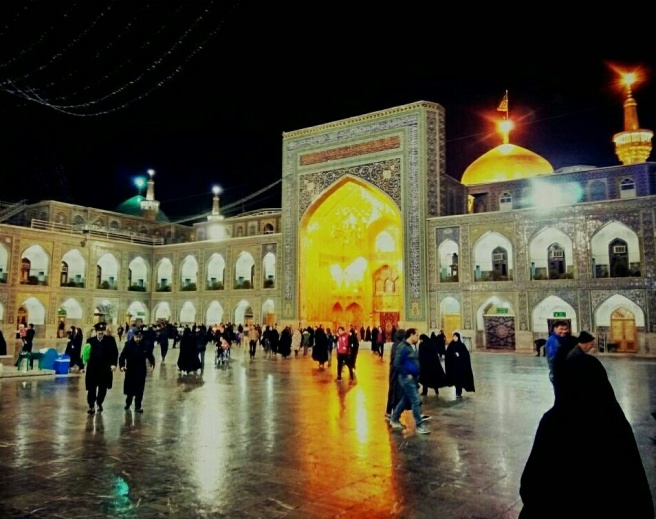 On reaching the hotel, I had to calm down myself to ensure a good night’s sleep after a long journey that required two connecting flights from Delhi to Mashhad and long busy days ahead. We had visited Mashhad for a purpose and day one seemed too long, leaving us exhausted by the evening. Notwithstanding the fatigue, all of us had gathered and headed towards the shrine together in a group, which was now just across the street from the hotel we stayed in. 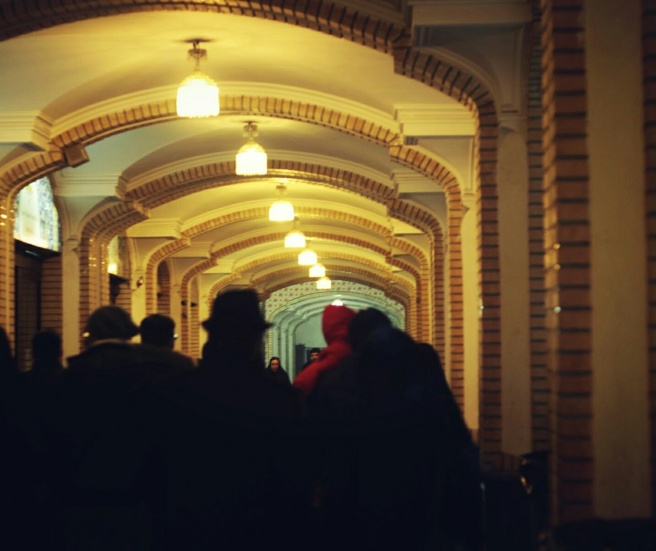 Calling harem (complex) of Imam Reza just huge would indeed be an understatement. It is the largest mosque in the world by area but due to our time constraint, we could explore only one-fourth of the shrine. The embellished ceilings, walls with their ornate tinted mirrors and stones, the golden tomb shining in its absolute majesty atop the beautiful Persian architecture left us in awe and in pure admiration for the extraordinary strong sense of art, aesthetics and attention to detail the Persians possess. 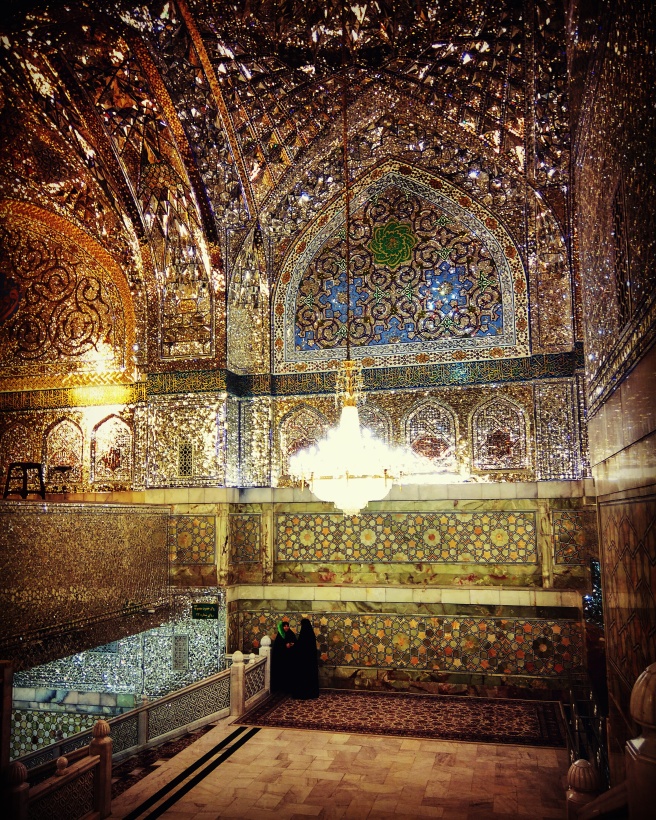 Besides beauty, the place has strong spiritual vibrations and I am sure every one of us was awestruck and totally consumed by it, feeling it around while entering the holy harem.

On my first day in the shrine, I could neither concentrate nor could I offer prayer for some unfortunate reasons, so had to leave soon for the hotel. Distressed and in vain, I walked with my companions toward hotel promising myself to come a bit early next day.

The second day also went by and it was the time of the day again I waited patiently for. To cut it short, I darted down the huge courtyards to grab a place in the ladies section of the holy harem where I could finally pray. To my comfort, the place was comparatively less crowded than last night. The night had finally arrived. I settled down with an old Iranian lady sitting to my right and one of my companions to my left.

Sitting in the middle, sandwiched, I looked up and down and around. A little girl wearing a tiny Irani chador, revealing her cute Hello kitty socks with few flicks of hair falling carelessly on her forehead, was settling herself down quietly next to a pillar while her mother started to pray. Her innocent, poised demeanor at such young age distracted me for a while. My heart brimmed with so much love for her, for a reason unknown.

I had already started praying amidst the non-negligible crowd but no noise could distract me now from what had just dawned on me. While prostrating during the prayers, I could feel somebody was standing in front of me, watching me. The presence was very strong, real and indeed overwhelming to put to words. I could not gather the courage to look up but to feel that presence. I don’t remember at what point I started to cry until the old Iranian lady sitting right to me kept her hand on my head and uttered something in Farsi while I was still offering the evening prayers.

I was so engrossed in the moment that I could not respond to her, even if it meant a simple nodding gesture for her. I simply could not.

While I finished my prayers, she touched my head. That’s when I caught a glimpse of her dark, kind eyes. I was still sobbing while she reassuringly held my hand and said in Farsi, which I could interpret with my limited knowledge of the language that Imam Reza, as Iranians fondly address him, had invited you and has recognized your visit now, you are honored.

Her words shook me for a while and I felt an immediate sense of responsibility towards my amaal (karma), gratitude and vision of happiness, which I believe is different for everyone. A powerful yet tranquil silence had engulfed my being for some time that night. Every worldly desire looked irrelevant; it was a strange feeling of peace as if some burden had jumped off my shoulders all by itself, as if everything had fallen into the right place at the right moment.

It was only the overwhelming emotion at that point, which was not ready to get settle down as tears of bliss continued to flow tirelessly, unless I distracted myself again, in the name of awkwardness this time.